Tabletop Tuesday: It’s good to be the King

Another day, another game.  This week, I’ve put together a review of one of my favorite push-your-luck dice games.  Before I get into the thick of it though, I wanted to mention to you guys that I’ve been working on the monthly format for Tabletop Tuesday moving forward.  Every month you can expect a TT article covering important news in the world of analog gaming, a feature discussing the hardcore tabletop lifestyle that I live every day and at least 2 brand-spankin’-new reviews.  I hope you guys enjoy the content and, as always, I’m always happy to receive feedback!

Now, on to the review…

My love for kaiju movies and the giant monster genre in general can be likened to Godzilla himself – large, menacing and when it decides to surface, it will take the combined force of several other monsters and a few potshots by the Japanese military to bring it down.  With that in mind, let’s take a look at King of Tokyo by IELLO – a dice game for 2-6 players that plays in a lightning fast 20-30 minutes. 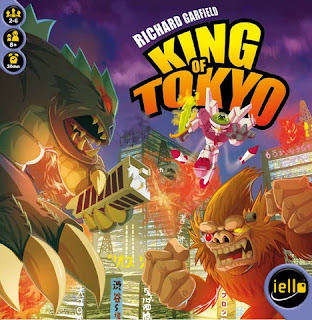 Components: Despite being a dice game, King of Tokyo has an impressive array of components.  The dice themselves are large, solid and just plain fun to roll.  They hit the table with a satisfying clatter and have easy to read symbols.  It’s hard to explain with mere words just how amazing these cubes are.  Each player will also get to choose a monster standee and matching score tracker.  These are simple, sturdy cardboard and the artwork is bright and vivid.  The cards used for various monster upgrades and special abilities have got some great artwork on them and are printed on good stock with a nice satin finish.  I’d recommend sleeving them, but then they won’t fit in the box insert (always a bummer).  Finally, the game has a board to denote which monster is in Tokyo (more on that later).  It’s small and simple, but is on par with the other compnents as far as quality.

Gameplay: King of Tokyo is a filler game through and through.  It sets up, plays and breaks down very quickly.  Players take turns rolling the six base dice and matching up symbols to gain different effects.  You can attack other monsters, heal damage that’s been done to you, gather energy (which is used to buy cards) or score victory points.  You get three throws of the dice in a turn and can keep whichever dice suit your needs between throws – will you try and wrack up as many victory points as possible or will you pummel the arrogant giant ape that’s currently occupying Tokyo?  There is a surprising amount of depth here for so random a game.  The different combinations you can get may allow you to go for one big victory point rush in a single turn or give you the opportunity to gain a little energy, heal your monster and do a little damage.  Like any dice game, it’s hard to plan your turn in advance, but I’ve yet to feel like I’ve been cheated by the dice.

Rules: King of Tokyo has a simple, full-color rules insert that is mostly easy to understand.  The game has a few quirks (mostly concerning the scoring of victory points).  Once you’ve got a game under your belt, however, you should be good to go.  Pick up the dice, roll, choose which ones you want to keep and repeat.  At the end of your three rolls, you compare your dice results and score victory points, damage opponents and gain energy accordingly.  At the end of your turn, you can spend any energy you’ve gained on upgrade cards that will do anything from giving you an extra head (which allows you to add one of the green bonus dice to your rolls) to forcing you to fight the military and sacrifice health for points.  Possibly my favorite mechanic is the press-your-luck decision of entering Tokyo.  If the Tokyo space on the game board is empty and you roll one of the damage icons, you enter Tokyo.  While in the city, you gain extra points at the beginning of each turn and any subsequent damage rolls you make are directed against all of your opponents.  The flip side to this is that only one monster can be the King of Tokyo, so any damage rolls your opponents make are directed against you and can not be healed.  If you take damage, you can choose to leave Tokyo, but you then sacrifice the bonus victory points.  It can be risky, but so far I have seen many a game won by a lone monster taking on all comers and finishing strong atop the smoking rubble that was once a Japanese metropolis.

Overall: King of Tokyo was a game that I bought based on a brief description and a few promotional shots of the box art.  I am a huge Japanese monster movie fan, so this was a no brainer, however unlike some other games, KoT really delivers on solid gameplay and integrates the theme very well.  There are two expansions that add more monsters and a few extra cards to help differentiate them from one another, but the base game delivers on that feeling of giant kaiju clashing in the middle of a city filled with terrified, poorly dubbed humans.  What more could you want?

ABOUT THE AUTHOR: Ryan Numrich
According to his peers, Ryan plays far too many board games, an awful lot of role-playing games, and occasionally makes time for video games. If asked his opinion, he would just laugh and wish for more hours in the day to create characters and place meeples. On the rare occasion he isn't rolling dice, he's reading comics or watching movies. He eats and sleeps between initiative steps