by Stephen on May 26th, 2018 · No Comments on GonnaGeek.com Show #240 – Gonna Add Descriptive Audio To Our Podcast 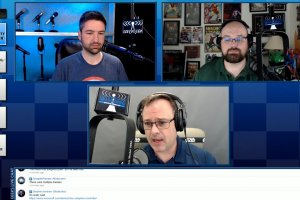 In this week’s episode we discuss how Microsoft has made an Xbox Accessibility Controller, how another satellite fell down, a new ability to screen share in Google Duo, SpaceX reusing a rocket within 24 hours and Google Pixel 3 notch rumors. In SPs Space Symposium, SP educates us on Luna 1.

Finally, we’ll go over the poll results asking which TV show people would most like to see cancelled.

This Week’s Hosts: Stephen Jondrew, Chris Ferrell and Stargate Pioneer. This episode was recorded on Monday, May 21, 2018 streamed LIVE at www.Geeks.Live. Full show information (including links related to points discussed) can be found at http://www.geeks.link/240/