Following a prolonged absence, Cody gives an update on the mostly-dormant state of Game/Life Balance U.S.

Jon explains why he will never risk flying with a layover while in the company of a small child ever again, and Cody shares his weight loss success story and the secret to how he lost 18 pounds in 6 weeks.

by Game/Life Balance U.S. on Nov 5th, 2015 · No Comments on Unqualified Gamers Podcast #124: Dragon Quest Heroes: The World Tree’s Woe and the Blight Below review

Jon reviews Dragon Quest Heroes: The World Tree’s Woe and the Blight Below, including a brief history of the Dragon Quest / Dragon Warrior franchise and a primer on Musou games. Plus, Cody has a potentially exciting announcement for the future of Unqualified Gamers!

by MusingsofaBlerd on Oct 16th, 2013 · No Comments on IDW BRINGS NEW MY LITTLE PONY MINI-COMICS TO STORES

Each pack comes with a 22 page micro-comic book which has been reformatted in size-5.75″ x 3.75″  to be exact. These books will easily be able to fit into fans’ backpacks and pockets.  The content has also been updated and will feature a two page  My Little Pony play set splash page in the middle of each book, in which the reader can place their removable sticker that comes with the pack. There’s also  a three-page “How-to-Draw” tutorial in each issue.  In addition to the comic and sticker, each pack also contains one of 16 different foldout posters and tattoos. Pretty cool huh? 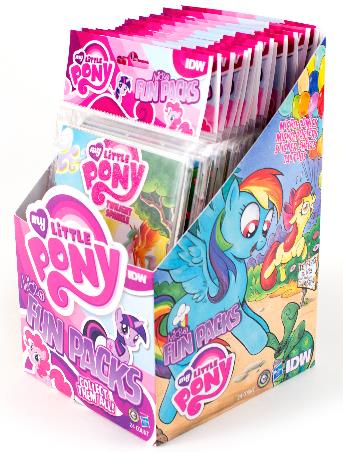 “These micro-fun packs are full of great surprises,” said IDW CEO and publisher, Ted Adams. “We’ve taken the comic and re-lettered it to adjust for the new size, then we’ve added a host of new content that will provide hours of fun. It’s a huge home run and we’re happy to continue the IDW tradition of delivering innovative, quality books.”

IDW’s director of new business Jerry Bennington had this to add:

“These fun packs are going to really wow people. The amount of content we’ve packed into such a small package is wonderful. Hopefully some fans out there will pick up these comics, start practicing the tips they learn in the “How-to-Draw” pages, and maybe they’ll be  auditioning for work with us some day. This is a product for fans both young and old. We want everyone to join in the fun!”

In addition to comic book shops, the My Little Pony Micro-Fun Pack will be available this November in select Walmart, Target and Toys R’ Us stores.

The San Diego Comic Con International, or SDCC 2013, known to some as The San Diego Comic Con, and to others as simply, THE Con. Each year it has grown and grown to become a media juggernaut with epic TV and movie announcements from all the big studios, tons of exclusives, and the greatest geek waiting room in the world, Hall H. For me, the best thing last week was SDCC 2013 and a big part of that, was that I wasn’t there.

Allow me to explain. In a very general sense, I don’t like people. Individuals are great; people are usually stupid, obnoxious, and loud. One on one you can almost always be civil and find the good side of a person, but when you get us in groups, man can we ruin things. So after a few years in military service being crammed into sleeping quarters with far too many people and now spending eight hours a day in an office I usually enjoy the quiet peacefulness of my office when I get home each day.

However, SDCC is the biggest thing each year in the geek world. So with no real love of large masses of humanity waiting in lines, how do you try to get the good without the bad? For me, it’s social media.

Honestly I thought Twitter was one of the dumbest things I had ever heard of when it came out. Then I realized that quite a few comic artists were on Twitter and were using it as a way to share pieces that they were currently working and a large group of them were using it to send out images of the commissions and sketches they were doing at conventions. And here I was living in Idaho without the resources to attend all these lovely conventions, so I got a Twitter account and started following a lot of artists. Pencilers, inkers, colorists, illustrators, cartoonists, a really large amount of artists.

Many of them also have Facebook pages set up. A good place for artists to share artwork, stay in touch with large groups of admirers, and update people on things like their con schedules for the season. Especially for the ones that don’t have dedicated web pages. Between the two, Twitter and Facebook, I see posts and tweets from all of my favorite artists and publishers and keep a fair track of what is going on in the comic book industry. This is never more evident than the weekend of the San Diego Comic Con.

It’s so crazy there that I have actually heard complaints that the people attending now head home usually knowing less than those sitting comfortably at home in the air conditioning watching their computer screens. Is it a great way to keep up? I think so. Is it as much fun as actually going to the con? Probably not. But I have no sunburn or swollen feet. I have not contracted a case of the con crud. And yet I still know that Avengers 2 is going to be The Age of Ultron. The cast for Guardians of the Galaxy looks amazing and specifically Karen Gillan even looks good bald. Plus I know that Zack Snyder made 5000 geeks heads explode when he showed the teaser logo for the second Man of Steel film showing the world that we will indeed finally get a World’s Finest movie. Great stuff all around.

So I didn’t get to go to SDCC this year, but that didn’t stop me from enjoying it. Also, if your Twitter feed and your Facebook page isn’t constantly bringing you the things you want to see and the things you want to know about, maybe it’s time for a change. Fill your life with the stuff that makes you happy, and excited, and giddy with anticipation. Me, I’m gonna go watch the Riddick Red Band Trailer again.