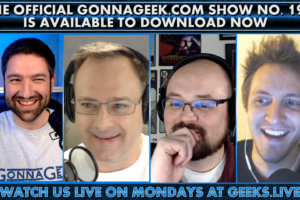 This week we’re pleased to have special guest of the GonnaGeek Network – Cody Gough. Topics include Joss Whedon taking over Justice League, Tom Hardy as Venom, a futuristic Mars Rover and the Kind of Kong musical. With all of the recent WannaCry outbreak, we’re also taking some time to talk to Cody Gough about his experience a couple years back with ransomware and what he’s doing now to help protect himself.

Want to chime in for a future show? Call 567-343-GEEK(4335), tweet @gonnageek, email podcast@gonnageek.com or like us at Facebook.com/gonnageek. Want to chat during our LIVE recording? Join www.geeks.live on Mondays at 8:45pm Eastern.