Star Wars: A Journey Through the New Canon – Part 3: Attack of the Clones

by Michelle Ealey on Nov 17th, 2016 · No Comments on Star Wars: A Journey Through the New Canon – Part 3: Attack of the Clones

A long time ago, a girl’s parents took her to see a science fiction film called Star Wars. On that day, she fell in love with all things Star Wars, even the extended universe that began with Timothy Zahn’s 1991 book, Heir to the Empire. But in 2012, Disney purchased Star Wars and proceeded to erase the majority of the extended universe she had come to know. With much of her Star Wars knowledge no longer applicable, she begins a journey through the new canon. Her goal – to travel the path of the new canon, experiencing as much of the new material in story order as best as she possibly can.

Star Wars: Attack of the Clones (2002), directed by George Lucas and written by George Lucas and Jonathan Hales, takes place ten years after The Phantom Menace. The film begins with the traditional crawl. Things are not going well in the Senate. A separatist movement threatens to split the Republic in two, which Chancellor Palpatine vows to stop. Because the Jedi are under the Senate’s control, they are spread thin across the galaxy. Some Senators work towards avoiding war, including former Queen of Naboo, Senator Padmé Amidala (Natalie Portman). A measure is up for a vote; passing the measure will approve of the creation of an army to assist the Jedi. Amidala lobbies for peace, making her the target of assassins.

This film is clogged with more politics than Phantom Menace. You have been warned.

With her life in danger, Palpatine has the bright idea to assign Master Obi-Wan Kenobi (Ewan McGregor) and his Padawan Anakin Skywalker (Hayden Christensen) to guard her. We first met Anakin in Phantom Menace. He was a kind, sweet nine-year-old boy who was taken away from his home planet of Tatooine to be trained as a Jedi. Obi-Wan promised his former Master to train the potential Chosen One. At the end of Obi-Wan & Anakin, the relationship between Master and Padawan seemed to be set straight.

Well, things got worse between the end of the comic and this film. 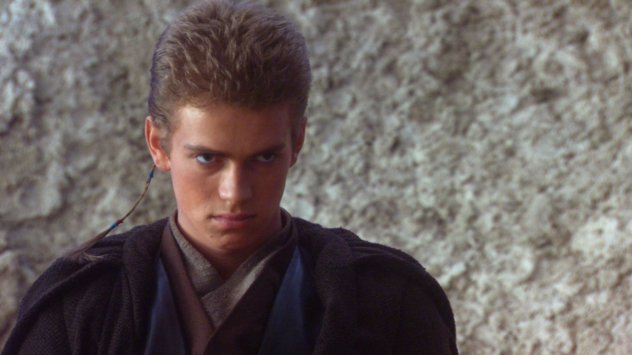 Hey, Anakin, why are you so angry?

Anakin openly questions Obi-Wan and argues about how to best guard Padmé in front of her and her group. For some reason, Anakin is angry and frustrated. His worst characteristic is his creepy obsession with Padmé. He’s upset when she barely knows him and sees him as a boy. News flash, Ani – she’s twenty-four now and the last time she saw you, you were nine. Padmé is five years older than you, boy, so why are you surprised?

While on Naboo, Anakin aggressively pursues Padmé. He confesses that he has thought about her constantly ever since they parted. He touches her without her consent; he kisses her, and she tells him they can’t be together. He continues to flirt with tickles and discussions about politics. And he shows her his emotions, venting about how unfair Obi-Wan is. Anakin believes he is ready for the trials to become a Jedi Knight, but thinks Obi-Wan is holding him back because of jealousy.

Anakin’s outbursts are the opposite of Jedi teachings, as is his romantic pursuit of Padmé. Jedi are forbidden to have emotional attachments, and Anakin’s biggest issue is letting go. Anakin has been plagued with bad dreams about his mother. He tells Padmé that he must abandon his duty to protect her to discover the source of his nightmares. Padmé volunteers to go with him.

On Tatooine, Anakin meets his stepfather, Cliegg Lars (Jack Thompson), his stepbrother Owen (Joel Edgerton), and Owen’s girlfriend, Beru (Bonnie Maree Piesse). After learning Tusken Raiders took his mother, he rushes to her in time for Shmi (Pernilla August) to die in his arms. In a rage, he kills every Tusken in the camp – men, women, and children. 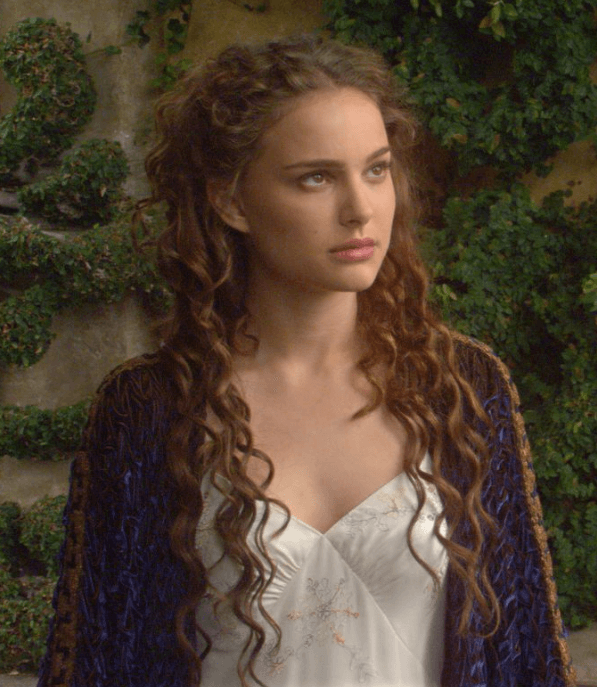 While Anakin was trying to break the Jedi rule about no sexy times with the fabulously dressed Padmé, Obi-Wan got to work and discovered a huge plot brewing against the Republic. He follows the clues to a planet the Jedi archives says shouldn’t exist, Kamino. The inhabitants of this mysterious water planet with bad weather welcome him, believing he is the Jedi Master who placed an order for a clone army ten years ago. Playing along, Obi-Wan learns the army are clones of Jango Fett (Temuera Morrison), a bounty hunter. These clones are designed to grow fast, be easily trained, and obey any command. Obi-Wan wants to question the bounty hunter, but he escapes with his son Boba (Daniel Logan), who is an unaltered clone. Thinking fast, Obi-Wan plants a tracker on Fett’s ship and follows him to Geonosis where he discovers that Count Dooku (Christopher Lee), the former Jedi and Separatists leader, is amassing a droid army.

Earlier, Padmé thought Dooku was behind the attempts on her life. Mace Windu (Samuel L. Jackson) dismissed her claims because a former Jedi would never do such a thing. Wrong.

Obi-Wan gets captured. Padmé and Anakin go to help him. After a silly sequence through the droid manufacturing plant straight out of a video game, they get caught too. Instead of killing their captives immediately, Dooku and company decide to execute their prisoners by big beasts in an arena show, but all does not go as planned.

The best part is when Padmé saves herself by picking the lock on her restraints and climbing to the top of the pillar. Mace Windu appears, thinking a few Jedi can handle a droid army.

Earlier in the film, Yoda (Frank Oz) said that many Jedi have become arrogant; they haven’t turned to the Dark Side, but they have become complacent.

Mace Windu is one such Jedi. He should not be surprised that many Jedi lose their lives and how quickly the droid army surrounds them.

Back on Coruscant, Representative Jar Jar Binks is manipulated into proposing a motion to give Chancellor Palpatine emergency powers. The motion is approved. Palpatine’s first act is to approve the activation of the clone army. This allows for Yoda to swoop in and save the day.

During the second wave of attacks, Mace kills Jengo Fett. Hey Mace, you knew Fett had information about Dooku and the Separatists, but you killed him anyway. Yeah, cutting off his head looked cool, but you’re either an incompetent Jedi or have your own agenda. Either way, your track record isn’t looking good.

Dooku flees, but Anakin and Obi-Wan catch up. Obi-Wan has a plan, but Anakin charges ahead and gets quickly tossed aside by Dooku. Saving the day again is Yoda. The coolest scene in the film is the duel between Yoda and Dooku. Yoda catches the lightening and throws it back at Dooku, and he flips and leaps during their lightsaber battle. Dooku puts Yoda in the position of having to either go after him or save Obi-Wan and Anakin; he decides to save his fellow Jedi.

Is the film bad? No. Is it great? No. The film is borderline forgettable because it lacks major developments or character growth.  Over the course of ten years, corruption in the Senate has metastasized, allowing for Palpatine to seize control, but he still seems like the man who wants to restore order to the galaxy. He does approve of the clone army, sparking the start of a war, but he claims it is to protect the Republic from Separatists attacks. The Dark Side has become stronger, forcing Yoda to admit the Jedi’s ability to use the Force has weakened, but they haven’t learned who Dooku is working with.

Everything is not good in the galaxy. But the film takes 142 minutes to tell us this.

The biggest change happens to Anakin. The whiney, emotional brat loses part of his arm, but his creepy persistence pays off. Padmé marries Anakin in a secret ceremony.

Up Next: Star Wars: The Clone Wars

ABOUT THE AUTHOR: Michelle Ealey
Michelle Ealey has been a geek for as long as she can remember. She enjoys sci-fi, fantasy, and horror films, TV and books, and she plays a lot of video games. Michelle writes about geeky things and is a co-host on the Starling Tribune Podcast. You can follow her on Twitter, @michelleealey.

Torchwood Rewatch: Combat (S1E11)
Posted April 2nd, 2020 -
We step into the ring with guest Julie this week, returning at long last to our Torchwood progress to discuss Noel Clarke’s contribution to the first season. (Yes, THAT Noel Clarke.) http://media.blubrry.com/gonnageek/p/media.blubrry.com/gallifreypublicradio/p/media.gallifreypublicradio.com/gpr375.mp3Podcast: ... 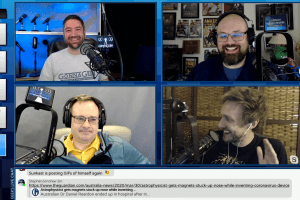 The L&L Show
Posted April 1st, 2020 -
All episodes are available at https://TheNeuroNerds.com.  Follow @TheNeuroNerds on Twitter/Instagram and Like us at Facebook.com/TheNeuroNerds. Summary Well, everything is upside down including The NeuroNerds!  ...

Legends Podcast #466; Booksmart (Teen Movies)
Posted April 1st, 2020 -
This one goes out to the Class of 2020. It’s time for some nights we’ll never remember with some friends we’ll never forget. With appropriate social distancing protocols, of course! For more geeky ...

ATGN 397 – Silent Willie
Posted March 29th, 2020 -
This week Peter G, aka Sailor Poland, joins the show again to talk about the latest geek news but for some reason Willie is awfully silent this week.  Following the news we begin discussion on the Cabin ...

The Stranger (1946)
Posted March 27th, 2020 -
After World War II, Hollywood was looking to return to doing what it does best and with a new paranoia of international intrigue and the return of history’s most notorious villains, producer Sam ... 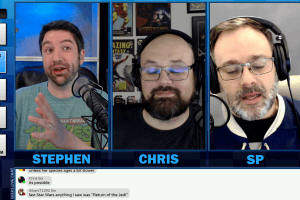 GonnaGeek.com Show #325 – Windows 10 Hits A Milestone
Posted March 27th, 2020 -
News points include: Rosario Dawson being cast for Mandalorian, Windows 10 hitting 1 Billion Devices, Apple possibly fixing a hotspot bug, and there may be another VR headset coming out. Plus, SP rounds ...