Valiant sent over this sneak peek at Matt Kindt and Trevor Hairsine’s DIVINITY II #1, along with the following release.
This spring…the much-anticipated follow-up to the five-time sold-out series that The Onion/A.V. Club calls the “Best New Superhero of 2015″ is here! Don’t miss a single universe-shaking moment as the original DIVINITY creative team returns for a perfect new jumping-on point into the expansive sci-fi epic that shook the world!

“Almost immediately after his first appearance, DIVINITY became a major focal point in the Valiant Universe and with good reason,” said Valiant Editor-in-Chief Warren Simons. “From IMPERIUM to BOOK OF DEATH, his actions have had major repercussions, but the story that Matt and Trevor have in store for DIVINITY II isn’t just a sequel—it’s the closing of the circle that began with Abram Adams’ lift-off from Earth and into the unknown. Now, the full consequences of that journey are going to be revealed as DIVINITY II reintroduces a powerful figure from the past – one that DIVINITY is going to wish stayed lost…”

At the height of the Cold War, the Soviet Union – determined to win the Space Race at any cost – green lit a dangerously advanced mission. They sent three cosmonauts farther into space than anyone has gone before or since. Handpicked orphans with no connections to Earth, trained as devout Communists, and restricted from having families, they became lost in the stars and encountered something unknown… Something that changed them.

Long thought lost and erased from the history books, Abram Adams was the first to return, crash-landing in the Australian Outback. The few that have been able to reach him believe him to be a deity. They say he can bend matter, space, and even time to his will. But, even with seemingly limitless power at his fingertips, he is concerned only with the secret love he hid away from his superiors and the unborn child he never had a chance to meet.

Now, Miska, the female co-pilot of the group, has also returned to Earth…but, unlike Abram she had no secret family. Unlike Abram, she still believes in the Communist ideal. And, unlike Abram, she intends to play a very real role in the return of Soviet glory.

Earth is about to meet a new god. And she’s a Communist. How long can it be before the nations of Earth bend before DIVINITY?

“DIVINITY was a true force of nature in 2015. With a seemingly insatiable demand from fans and retailers, it’s racked up 11 red-hot printings, a slew of ‘best of ‘awards, and astronomical back-issue prices. This has been a true runaway hit in every sense of the term,” said Valiant CEO & Chief Creative Officer Dinesh Shamdasani. “From the beginning, the origin of DIVINITY was built to be told in two parts, and we are incredibly excited for fans everywhere to have their minds blown again as we reveal more. Each member of the original creative team––from Matt to Trevor to Ryan to David—has not just returned, but redoubled their efforts to make DIVINITY II not just a title, but a statement of purpose. Packed with action, ingenuity, and brilliantly conceptualized storytelling, you’re simply not going to find a series like this anywhere else in comics today.”

This April, mankind will bear witness to the cosmic force of creation itself as master storytellers Matt Kindt and Trevor Hairsine unleash a cataclysmic new chapter for the breakout new hero of the year, only in DIVINITY II #1 (of 4)! Featuring covers by Jelena Kevic-Djurdjevic (Thor), Tom Muller (Wolf),Trevor Hairsine (X-Men: Deadly Genesis), Phil Jimenez (Infinite Crisis), and Adam Gorham (DEAD DROP), DIVINITY II #1 (of 4) will also be presented in the deluxe Valiant Prestige format with an ad-free presentation featuring matte-laminate cardstock covers, custom-designed endsheets, exclusive back matter, and more. 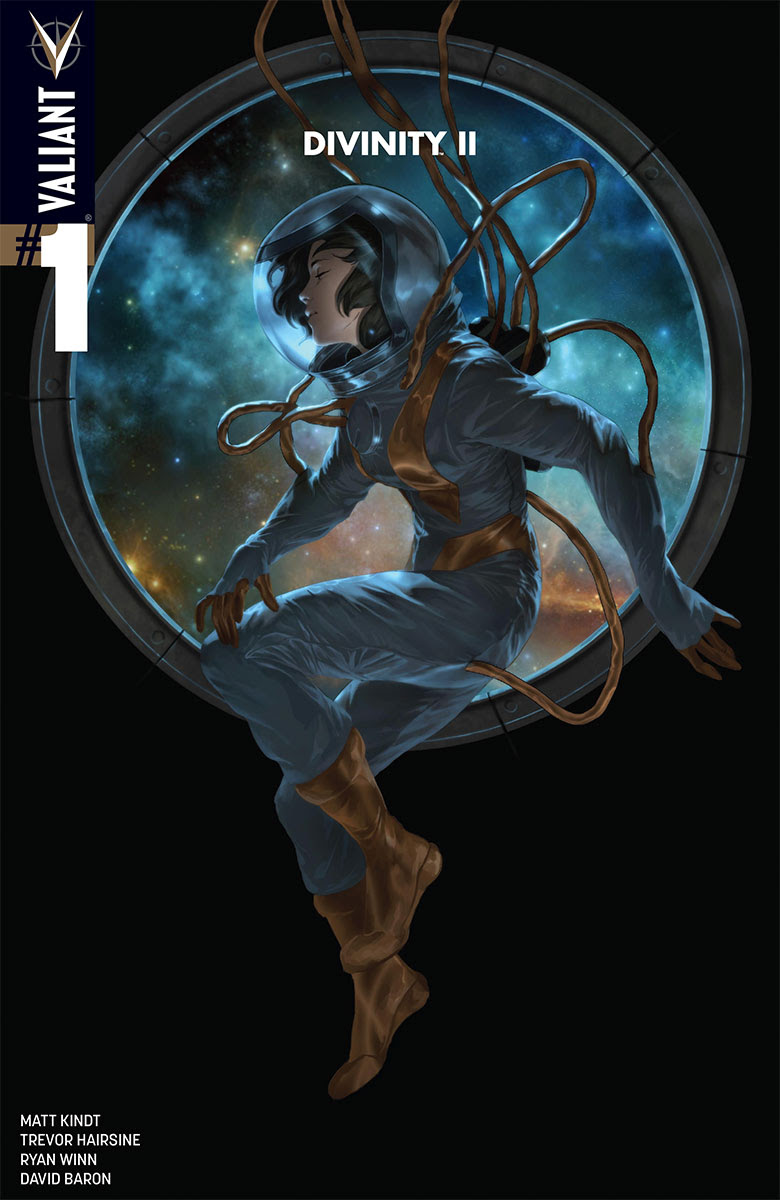 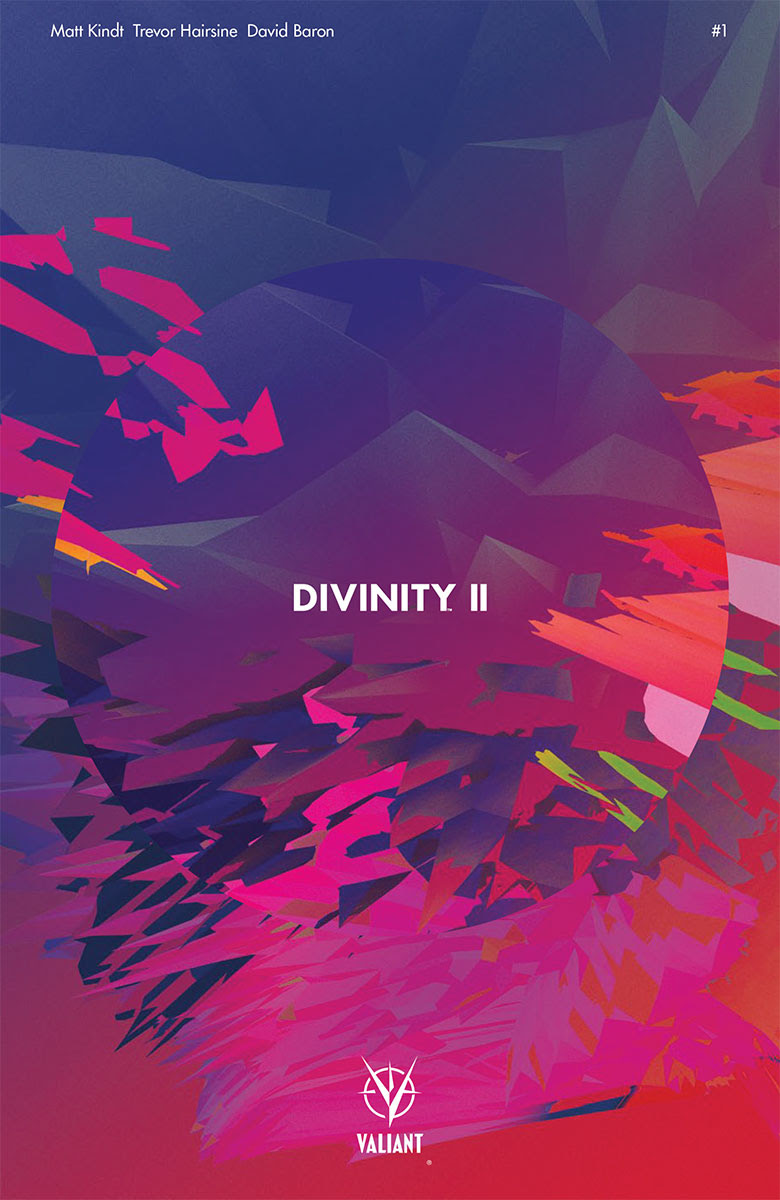 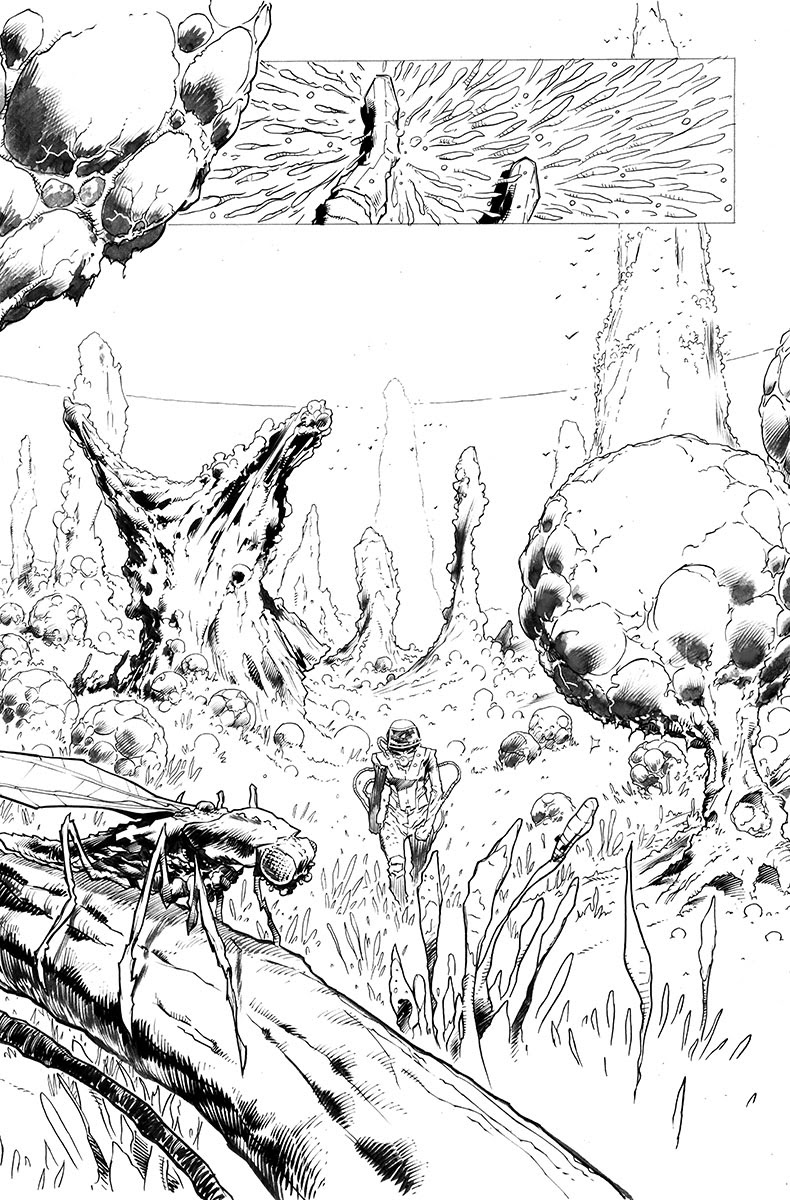 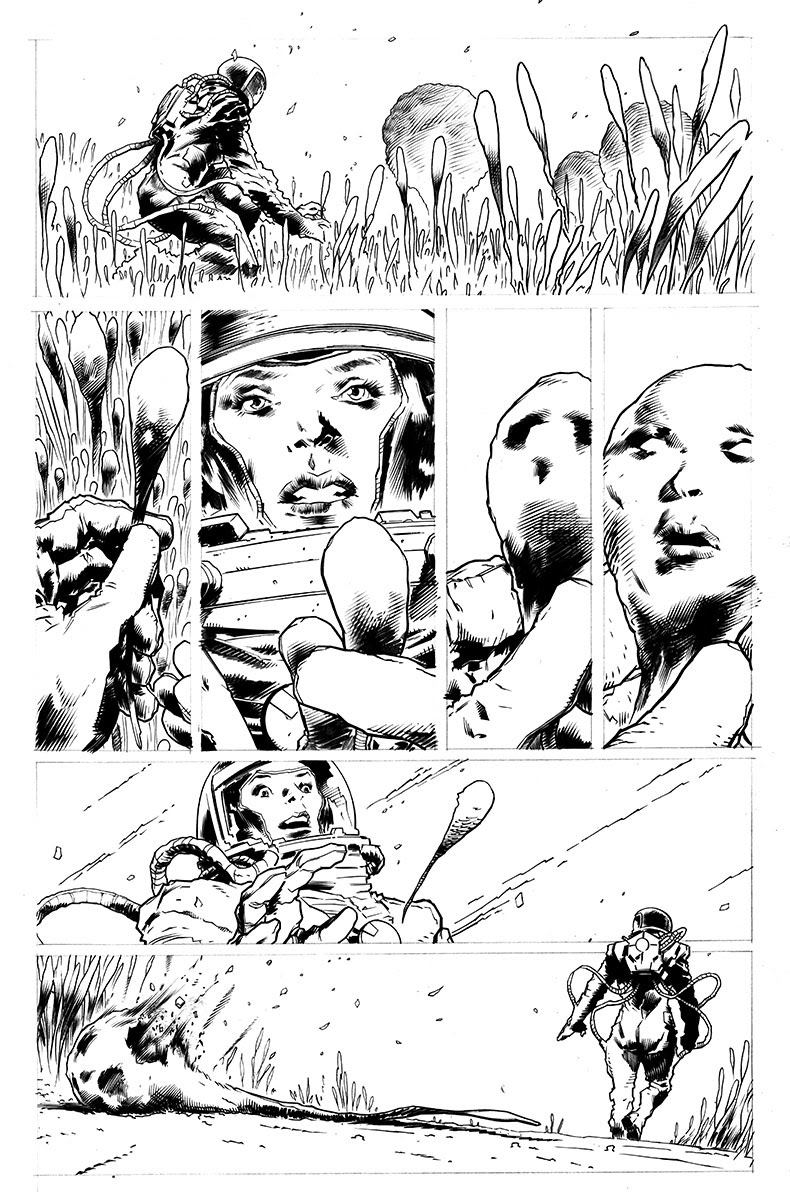 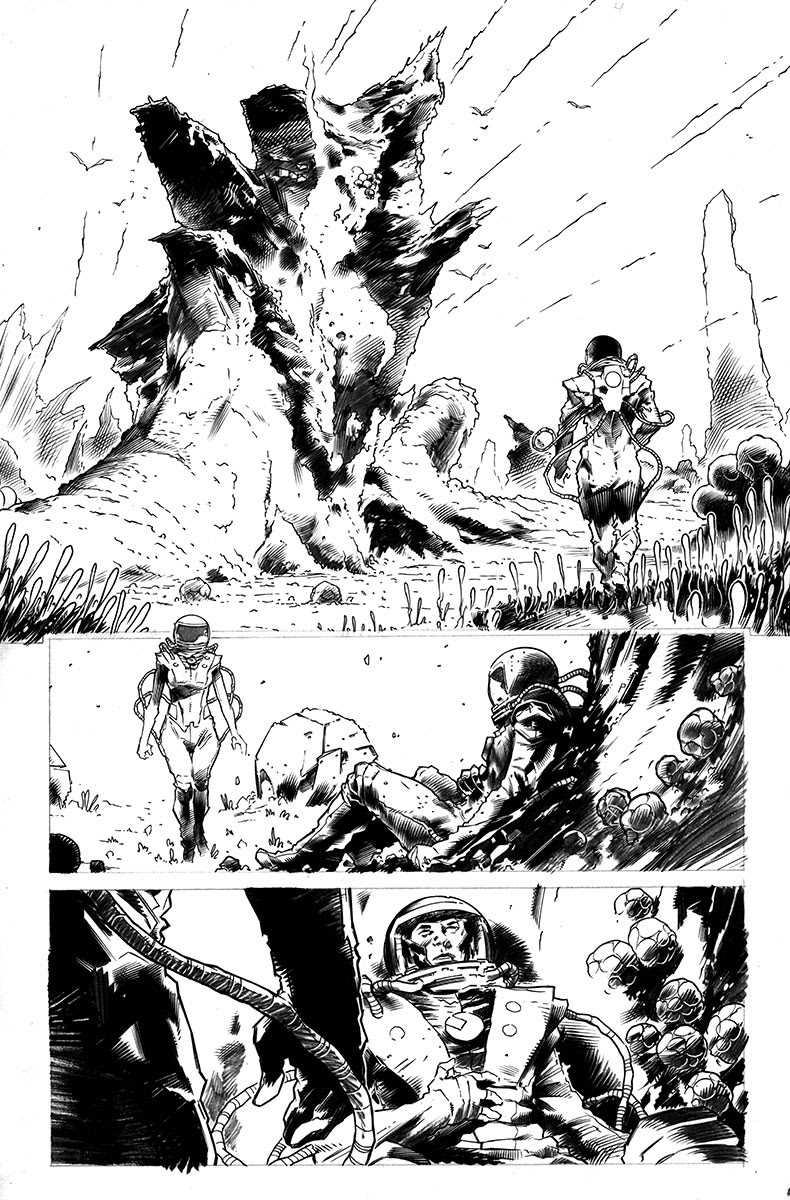 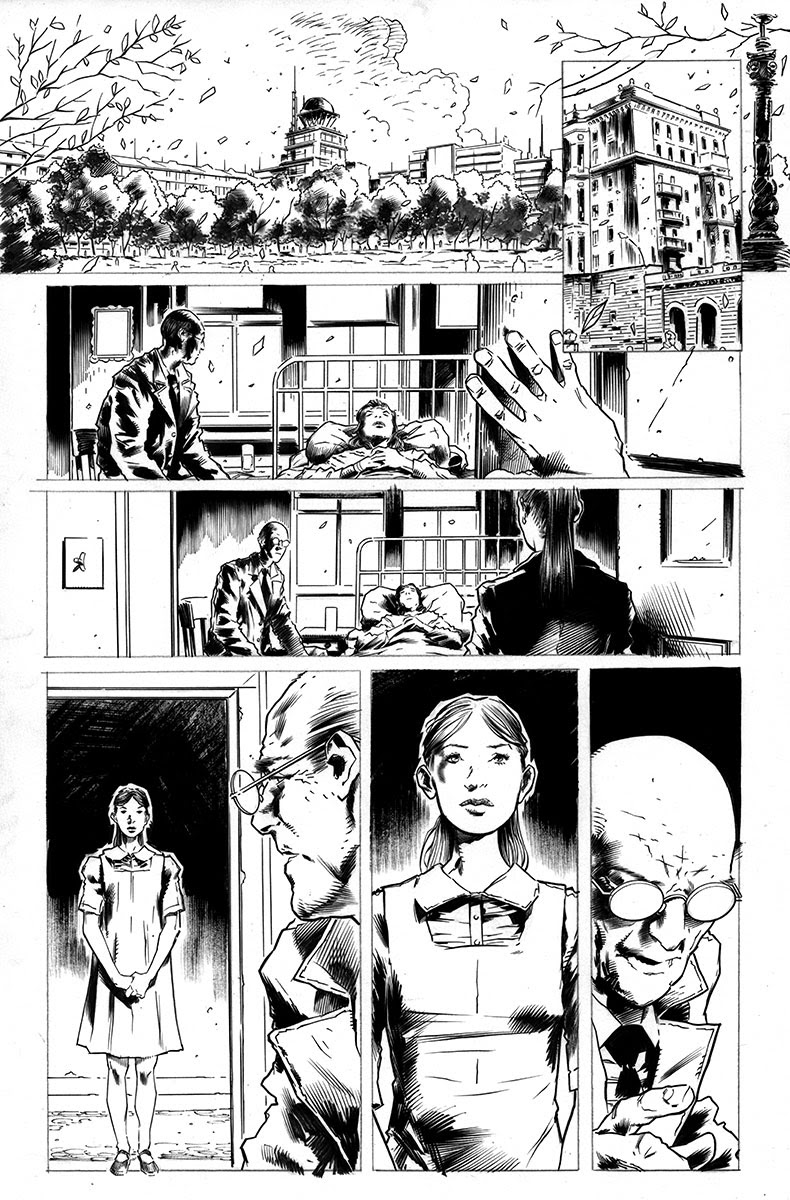 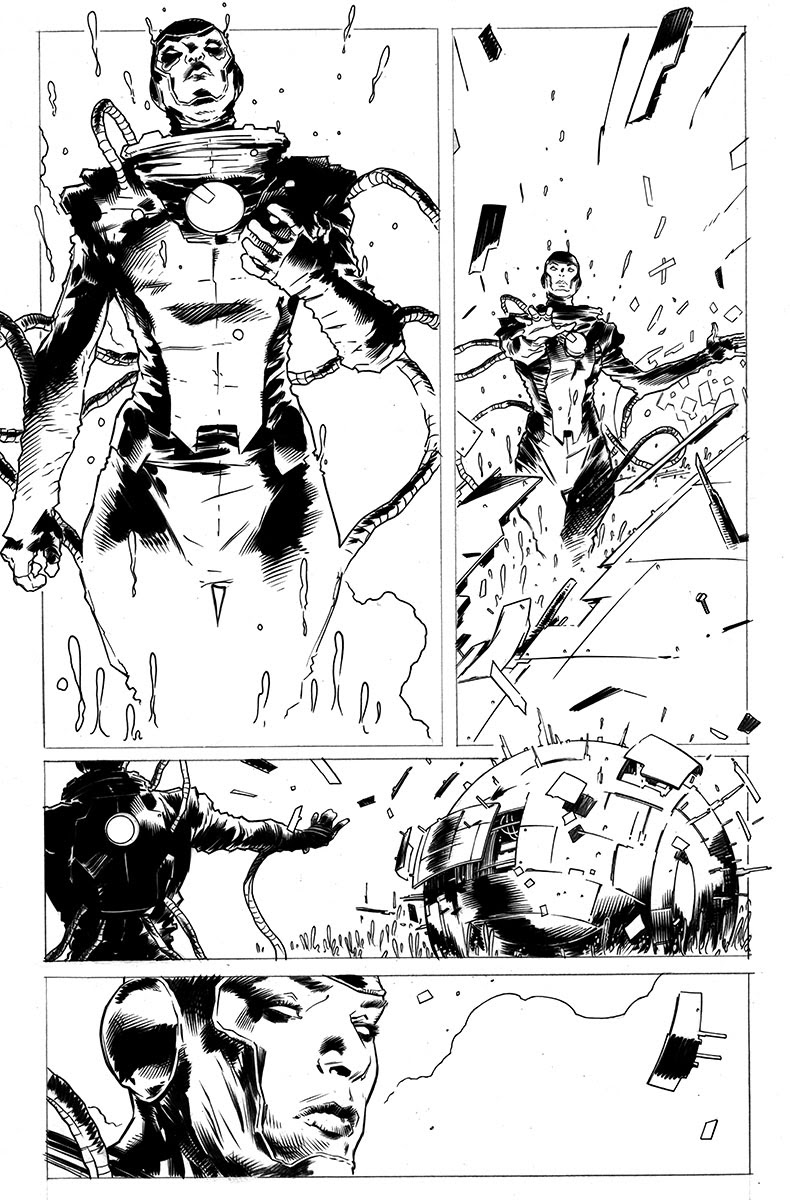 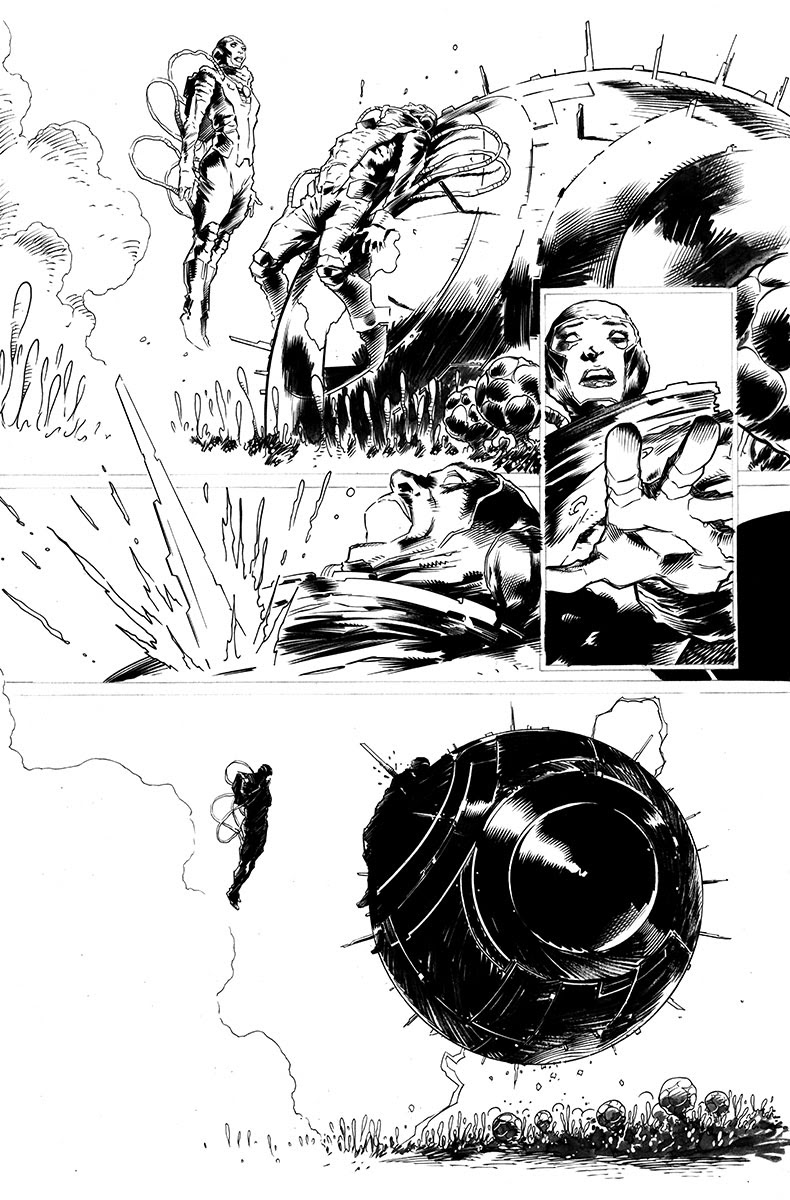 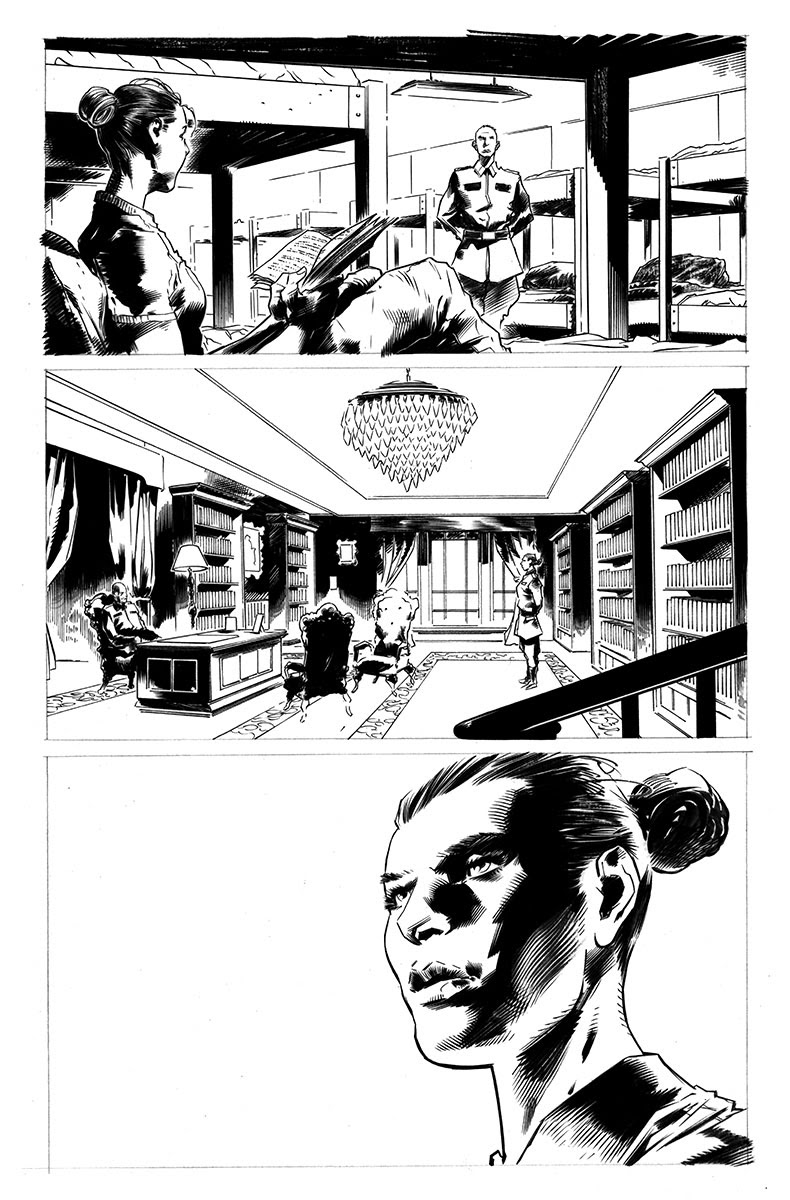 First Look at December’s THE VALIANT #1

by Sebastian Piccione on Sep 4th, 2014 · No Comments on First Look at December’s THE VALIANT #1

VALIANT has posted a a preview of their upcoming mini-series, THE VALIANT, by Jeff Lemire, Matt Kindt, and Paolo Rivera.

A battle ten millennia in the making…

An entirely self-contained, new reader friendly comics event spotlighting Bloodshot, the Eternal Warrior, Geomancer, and a cast of heroes and villains from across the Valiant Universe, THE VALIANT is a visionary new adventure from three of the greatest creative talents in comics today.

The Eternal Warrior has protected the Earth for more than 10,000 years. A master of countless weapons and long forgotten martial arts, he is guided by the Geomancers – those who speak for the Earth. During his long watch, the Eternal Warrior has failed three times. Each time, the Geomancer was killed…and a new dark age for humanity began. Each time, he was unable to stop The Immortal Enemy – a monstrous force of nature. A civilization killer. A horror that appears differently each time it arrives…and whose seemingly only purpose is to bring disorder and darkness to the world. Now, the time has come for The Immortal Enemy to return once more. But, this time, the Eternal Warrior will be ready. This time, he has a force greater than any single warrior. This time, he has…THE VALIANT.

Rai jumps back into the comic book world at Valiant Entertainment. The spirit protector of Japan in the far future makes his return as the badass defense system for the A.I. known as Father which controls all of Japan and its citizens. 90s nostalgia on paper.

The story so far is one many fans my age probably already know with a few tweeks and alterations. The A.I. is called Father now and Spylocke is now an actual real character in Japan instead of a fictional hero. The peaceful existence Japan has been enjoying is shattered as a seemingly random, vicious killing makes headlines as the first murder in 1,000 years. The world is new and the characters are basically brand new for the most part so it becomes difficult to soak it all in sometimes. There is a ton of new stuff to take in and it’s almost impossible to really digest it all and get the feel of this book. I had to re-read several pages over and over but maybe I’m just slow on the uptake. Or maybe I’m mesmerized by Crain’s art. Next paragraph for that. The story isn’t convoluted at all but it is packed full of info. The overall story is covered fine though. Rai starts investigating and finds another suspect with a pirate style flintlock pistol. Who are the people using these antique weapons to murder…boom, suicide bomber. Hours after the first murder in 1,000 several others happen and Rai is overwhelmed. He then encounters Spylocke and some kind of crudely made Frankenstein-esque robot man thing who proceeds to whoop his futuristic samurai butt. In short, the storyline is a massive info dump without being extra wordy and still making it fun to read. I also like how seeds are planted already of Father’s possible mistakes and Rai’s statement that he doesn’t take orders, he defends Japan. Smells like an uprising to me.

Now, on to the big draw. Clayton Crain is one of my favorite artists in damn near any medium of art you can imagine and he doesn’t disappoint in Rai. When I found out he was drawing an awesome sci-fi hero from 90s Valiant, I was giddy like a school girl. The entire tone of the book from top to bottom, left to right is completely futuristic. It screams 4001 AD on every page and doesn’t let up on the gadgets, architecture, people, and every other possible thing that needs to be upgraded for it to be believable and feel like almost 2000 years from now. The action is adrenaline-fueled katana swingin’, ninja kung fu madness and Rai looks like possibly one of the most badass characters I’ve seen in forever. The last page of this comic book is worth the cover price by itself. I mean it is truly a beautiful thing to behold. I hated when Crain stopped drawing Carnage but this is an even better fit for him.

All in all, this trip down memory lane seems to be a good one so far. It may be a ton of info but it is the 1st issue. That being said, the story lays down an excellent foundation for what’s to come. It has murder, mystery, pirate guns in 4001 AD , katanas, cyborgs, and everything else geeks love. Plus there’s Clayton Crain. Another win for Valiant.