PAUL CORNELL RETURNS TO DOCTOR WHO COMICS FOR AN UNEXPECTED TWIST ON THE THIRD DOCTOR!

by MusingsofaBlerd on May 19th, 2016 · No Comments on PAUL CORNELL RETURNS TO DOCTOR WHO COMICS FOR AN UNEXPECTED TWIST ON THE THIRD DOCTOR!

May 18, 2016 – BBC Worldwide North America and Titan Comics are excited to announce the return of the Third Doctor this August, in comics! This brand-new five-part comic series, written by fan-favorite Doctor Who scribe Paul Cornell (Wolverine, Action Comics, The Severed Streets), stars the Third Doctor, as played by Jon Pertwee, alongside companions Jo Grant (Katy Manning) and the Brigadier (Nicholas Courtney) in classic Doctor Who action.

Fresh off last year’s epic smash-hit, Four Doctors, Paul Cornell teams up with artist Christopher Jones (Young Justice, Marvel’s Avengers) to bring unexpected twists and turns to the lives of the Third Doctor and his companions in an all-new story, “The Heralds Of Destruction.”

Actor Jon Pertwee starred as the Third Doctor in 128 episodes from 1970 to 1974. Pertwee’s portrayal of the Doctor was a suave, dapper, and technologically oriented man of action, who spent his time stranded on Earth, working with the international military group UNIT.

When something enormous and extraterrestrial crashes into Bedfordshire, the Doctor, Jo Grant, and the forces of UNIT under Brigadier Lethbridge-Stewart mobilize immediately to investigate – and find themselves in the middle of a pitched battle against a terrifying invader! But the shocking face that awaits their return to base may tip their whole world off its axis.

Retailers can order issue #1 of Doctor Who: The Third Doctor from the June edition of Diamond PREVIEWS. This all-new storyline in the world of an old classic will delight longtime fans and freshly converted Whovians alike. Fans can find their nearest comic store at ComicShopLocator.com.

Doctor Who: The Third Doctor #1 covers:

DOCTOR WHO TV SPINOFF, TORCHWOOD IS BACK, IN COMICS!

Titan Comics is excited to announce that Doctor Who TV spinoff Torchwood is back, in an all-new ongoing comic series starring the daring Captain Jack Harkness and Gwen Cooper.

Written by Captain Jack himself – John Barrowman – and Carole E. Barrowman, and with issues illustrated by Antonio Fuso (Drive, The Girl Who Kicked the Hornet’s Nest) and Pasquale Qualano (Batman ’66, She Hulk, Harley Quinn), this spectacular original ongoing series is not to be missed.

In continuity with the new hit Torchwood audio dramas from Big Finish, as part of the official continuation of the Torchwood saga, the comic arrives in stores on July 6 – the week of Titan’s third annual Doctor Who Comics Day event – Saturday, July 9 2016.

The BAFTA-winning cult science-fiction drama by Doctor Who showrunner Russell T Davies, which aired for four successful seasons from 2006 to 2011, follows the exploits of Captain Jack, Gwen (Eve Myles – Broadchurch), and their team as they investigate the unusual, the strange, and the extraterrestrial.

The hotly anticipated Torchwood comic sees Captain Jack return to Cardiff to engage the help of the last person who expected to see him again, Gwen Cooper! A dark technology from a forgotten species has been claimed by a conspiratorial power… and in this collision between an ancient civilization and an all-new evil, the Earth itself may be forfeit! Only Jack, Gwen, and their allies from what remains of Torchwood hold the key to stopping a cataclysmic wave of destruction… On the road, on the run, and under fire – can Jack and Gwen put aside their differences and rebuild the heart of Torchwood… before its flame is stamped out forever?!

Retailers can order Torchwood #1 from the May edition of PREVIEWS.  This new series is a must for Torchwood fans, who can find their nearest comic store at ComicShopLocator.com.

TITAN COMICS ANNOUNCES THE FINAL ISSUES OF ‘THE O MEN’

by MusingsofaBlerd on Mar 6th, 2016 · No Comments on TITAN COMICS ANNOUNCES THE FINAL ISSUES OF ‘THE O MEN’

After battling their nemesis Anathema and her Vicious Circle it’s a very different O Men that we encounter.

The various O Men members have been shot, exiled and brain-wiped – but somehow they are all back! How? All will be revealed! Plus, something is seriously wrong with one of the team, Grace… Get yourself ready for a major shock when you discover what’s going on!

This release also includes an issue 7.0, a special mini-strip reintroducing all of the characters.

“I’m very excited to return to The O Men and finally finish the story I started over 15 years ago! I can promise some interesting stories ahead – and lots and lots of answers to the series’ biggest mysteries!” said creator Martin Eden.

May 18, 2016 sees the return of the punk princess in a new Tank Girl series from co-creator Alan Martin and rising star Brett Parson (New Romancer)!

Fresh off the back of their latest calamitous chapter comes this shiny new Tank Girl tale from series creator, Alan Martin and artist extraordinaire, Brett Parson! Expect a healthy dose of delirium and plenty of ball-crunching action in this high-octane crosscountry skirmish that asks the question: is this world really big enough for two Tank Girls?! Strap yourself in, folks; It’s gonna be one helluva ride!

by MusingsofaBlerd on Feb 15th, 2016 · No Comments on TITAN COMICS REVEALS DATE FOR 2016 DOCTOR WHO COMICS DAY!

Titan Comics is pleased to announce this year’s global Doctor Who Comics Day event will take place on SATURDAY, JULY 9, 2016.

Doctor Who Comics Day is a global event inspired by Titan Comics’ Doctor Who comic books. In its third year, the event is set to be even bigger with new comics and collections, signings and events across the globe.

2015’s event tied-in with a special, brand-new, five-part weekly Doctor Who comics cross-over series by Paul Cornell and Neil Edwards, and saw comic readers get the chance to celebrate Doctor Who Comics Day at over 2900 locations including comic shops, bookstores, retail chains and libraries.

“We’ve got some great things planned for this year’s 2016 Doctor Who Comics Day event,” said Ricky Claydon, Direct Sales & Marketing Manager at Titan Comics. “As well as working closely with stores and libraries to develop events for the day, for 2016 we’ll be supplying Doctor Who fans with event kits to hold their own reading group events.”

More details about this year’s 2016 Doctor Who Comics day event will be released soon.

To sign-up your store, library, or register for an event kit to host your own reading group event on Doctor Who Comics day, visit

Press Release: Ghost Wolf Was Born in Snow and Blood

by MusingsofaBlerd on Jan 4th, 2016 · No Comments on Press Release: Ghost Wolf Was Born in Snow and Blood

Listen to the trees. Listen to the rocks, the wind howling in the high peaks. They still whisper the tale of the Ghost Wolf. A story told one thousand times. A tale waiting for you to be enjoyed.

From the prolific mind of El Torres, with the art of awesome artists like Angel Hernández (The Westwood Witches, Star Trek/ Green Lantern, DC Infinity Crisis), we are proud to present the first volume of the Ghost Wolf: Born in Snow and Blood.

This volume reprints the acclaimed miniseries GHOST WOLF published by AMIGO COMICS, filled to the brim with barbaric violence that is sure to please fans of this genre!

One human, one wolf, the vessel for the spirit of vengeance – The Ghost Wolf!  Can you get enough of brutal barbarian action?

Read here the full saga of the Ghost Wolf, the spirit of vengeance of the Northern Wastes. When the clan of the Sons of Corr lost their courage, they were swept by the wild tribes. But there was one man decided to fight… and paid with his life. He will become the vessel for the long, forsaken spirit of vengeance… The Ghost Wolf!

by MusingsofaBlerd on Aug 6th, 2015 · No Comments on Press Release: Bronarr Smashes His Way Through Space Aliens in ‘Strange’ Comics Magazine

In the tradition of publications like Heavy Metal and 2000AD comes Strange Kids Club Magazine—a self-published comics and humor magazine that provides new and upcoming creators a chance to have their work seen in print while also expanding on the offbeat, irreverently funny universe of Strange Kid, the fictitious blue-haired mascot of Strange Kids Club.

The latest issue, now on Kickstarter, includes four self-contained stories by writers and artists from around the globe and introduces readers to a brand new character, Bronarr: Space Barbarian! Behold as Bronarr blasts, bludgeons, wrestles and wiggles his way through the forces of evil amongst the stars—a hilarious parody of madcap muscleheads like Thundarr the Barbarian and He-Man—in a space misadventure starring Strange Kid and his pals Lando, a smart but relatively normal kid, and Orwell, a chupacabra who only speaks Spanish.

Also featured in this issue:
We Are Pirates (Part 1) by Michael Anderson
While running from a giant monster across the waterless wasteland that is now Earth, the fearless adventurer No-Beard runs into a band of Bounty Hunters looking for a big score. Just so happens No-Beard has a high price for his head, and the bounty hunters know it. But could there be something more sinister that unites this motley crew?

Grayskull Grindhouse: If I Had the Power by Mike LaRiccia
Witness as everyone’s favorite blonde barbarian embarks on a quest of vengeance in this hardcore parody that stars a bloodier, definitely more brutal, cast of men and monsters set out to master the universe. Prepare to go to uncomfortable places—this comic is not for children… or sentimental adults.

Star Iguana: Black Hole Witch by Joshua Agerstrand & Ralph Niese
Meet Star Iguana, former Starbase engineer turned Space Pirate after being resurrected by The Masonian Gods—secret rulers of the universe—to do their bidding for eternity. On this mission, Iguana and his crew are tasked with capturing The Black Hole Witch, one of the galaxy’s deadliest femme fatales.

kaboom Visual Teaser, “This is Abigail”

by Sebastian Piccione on Sep 2nd, 2014 · No Comments on kaboom Visual Teaser, “This is Abigail”

BOOM! Studios sent this visual teaser for the kaboom! All ages line.  It comes with the simple tagline of “This is Abigail,” and shows a little girl holding hands with a large semi-monstrous blacked-out figure.  More to come, I’m sure. 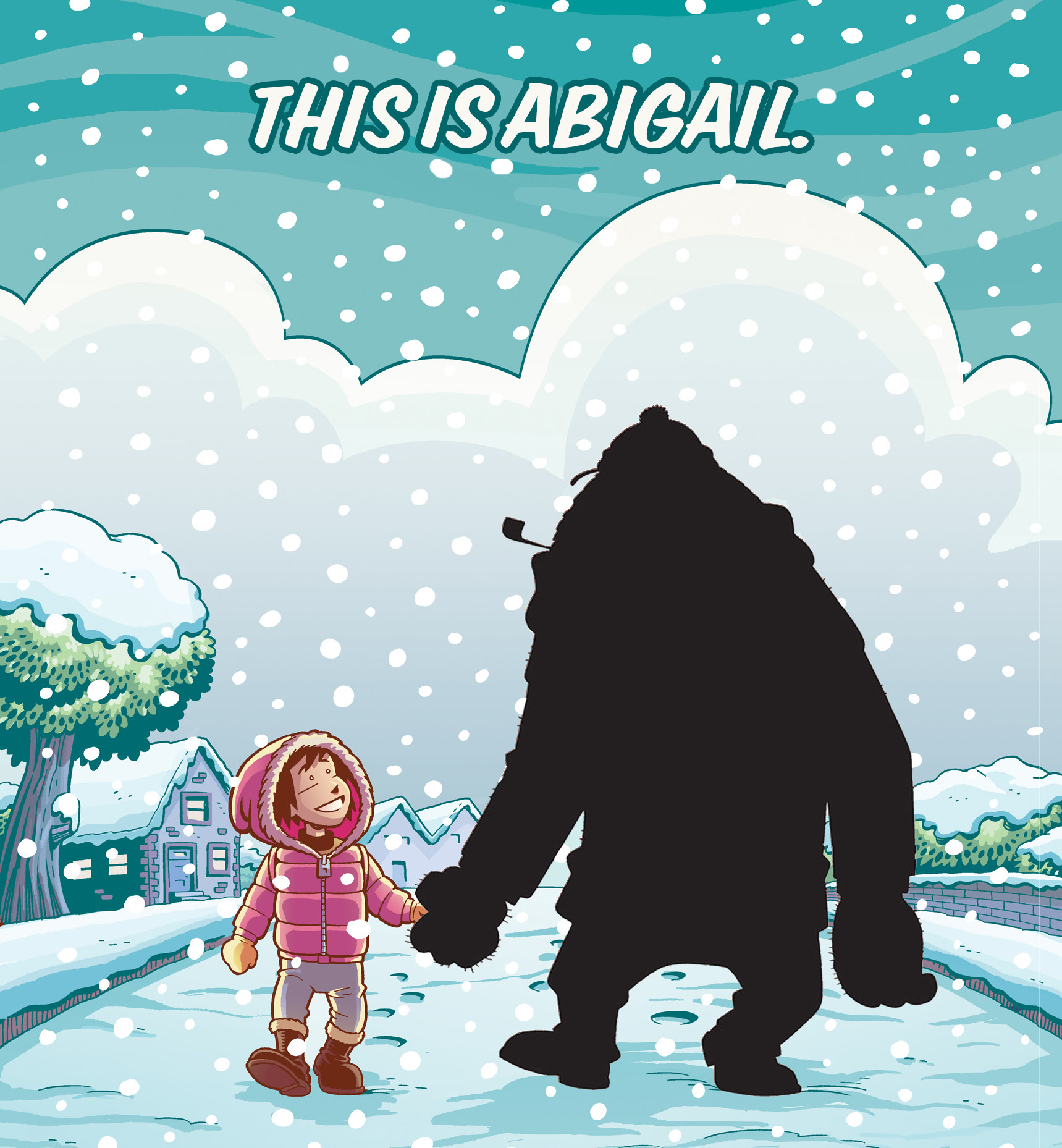 To save the Marvel Universe, Earth’s Mightiest made the most controversial decision of their lives resulting a disaster unlike any they’ve seen before. But with one final shot to make things right, can they turn back the hands of time and restore everything to its former glory? And if they can’t what happens next?! Age Of Ultron #10, by the jam packed, blockbuster creative team of Brian Michael Bendis, Bryan Hitch, Carlos Pacheco, Brandon Peterson, Alex Maleev, Butch Guice, David Marquez and Marvel Chief Creative Officer Joe Quesada, leaves no stone unturned and has an ending nobody can see coming!

The Avengers are down to their last resort as they forge the ultimate plan to finally break free from Ultron’s ferocious iron grip. So make sure you’re first in line at your local comic shop to pick up a copy of Age of Ultron #10 – TOMORROW!